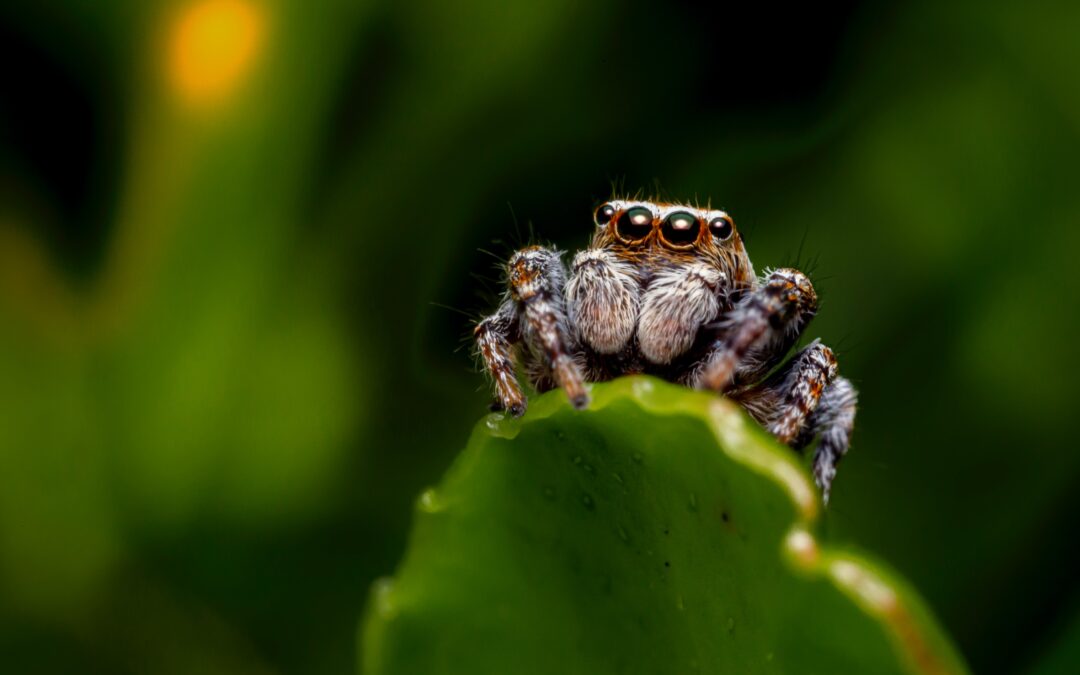 From ancient mythology to modern pop culture. From horror films to Halloween décor. Few things can creep people out as much as the spider. Arachnophobia usually comes up on any google search top ten lists of most common phobias including #1 on Betterhelp.com.

They say to conquer your fears, you must face your fears, and here in the Albany/Corvallis Oregon area there are plenty of spiders. So in the spirit of understanding and clickbaity lists, here is my… 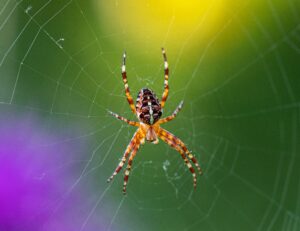 Starting strong with a classic. If you asked a child to draw a web it would probably look like this spider’s net. It constructs its circular web from different types of silk: non-sticky strands, for structure and for a place for it to crawl, and sticky silk strands to snare and entangle unwary insects that fly into it. The spider sits in the middle lying in wait, feeling for the vibrations that announce a catch whereupon it springs to action, running over and wrapping its prey in silk to enjoy at its leisure. Around here, Araneus diadematus (Cross orbweaver) is probably the most common in urban areas, hanging its web across your front doorframe for you to walk through every morning. Don’t worry though, this spider is harmless and the worst you will get is a good case of the willies. 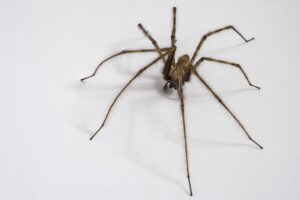 You know how people describe the fish they caught? “It was thiiiiis big!” they exclaim while stretching their hands out to the sides. This is the same thing for the spider world, although it’s usually demonstrated with one hand showing a large “C” shape like they are throwing a football.

It’s not too much of an exaggeration though. They get pretty big. Of the three species we mainly deal with Eratigena atrica, or the “Giant House Spider” is the largest. They can grow up to and reportedly beyond 3 inches across (including legs)! At 1.73 ft/sec they also held the Guinness book world record for speed up until 1987 when they lost the crown to “windscorpions”. Along with its cousins Tegenaria domestica (Barn funnel weaver), and the dreaded Eratigena agrestis (Hobo spider) they’ve been entertaining cats and scaring the bejesus out of people since time immemorial.

Speaking of the hobo spider. Although it was listed as “medically important” in the 1980s after reports of bites that resulted in necrotic wounds, it was removed from the CDC list of dangerous spiders in 2017 and has always been considered harmless in its native Europe. So don’t worry too much, if you see them out and about they are probably just hunting for food or looking for love, neither of which is you. 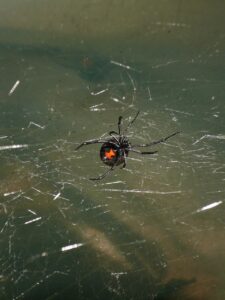 A Black Widow in her web

Now this one is certainly “medically important”. The western black widow is perhaps the most recognizable spider on our list. The mature female is jet black with its signature red hourglass on the underside of its abdomen (the shape and brightness of this marking can vary from spider to spider). Although bites are relatively rare the venom is certainly the most toxic of all the spiders in the area.  It injects a neurotoxin that works on the nervous system affecting muscles and causing flu-like symptoms rather than causing swelling and necrotic wounds.

They range from Canada, B.C. all the way down to Mexico, from the coast to the western great planes. Although they aren’t super common in the Willamette Valley,  I have seen a few in the decade or so that I’ve worked for Good Earth. They typically hide in cracks and holes, weaving their messy webs outside to catch prey after dusk. The silk of a mature black widow is extremely strong, to the point where if you swipe your hand through it it will produce an audible ripping sound. In fact, it’s so strong that in WWII it was used for the crosshairs on gun sights! 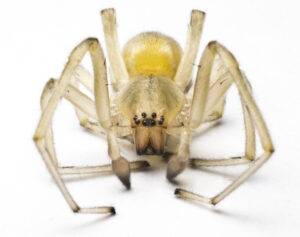 Small and pale-bodied. These spiders are another common indoor invader. You will usually see these nestled in their little silk pouches under rocks, in the eves of houses, and in the seams of the siding. In the fall and winter, they retreat indoors, weaving their sacs in the upper corners of rooms and the folds of drapes. They are active hunters, preferring to roam about looking for prey rather than snaring it in webs. They allegedly bite humans quite often. Not because they are looking for a fight but because they like to take shelter in the folds of clothes and linens. When trapped against the skin the spider bites defensibly.

Although opinions on the toxicity of their venom range from nothing to brown recluse-level necrotic wounds, the truth seems to fall on the relatively minor side of things. Usually small slightly swollen bumps with mild itchy redness. 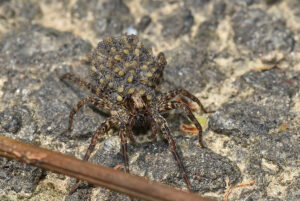 Living up to its name this is another spider that eschews the snare for the thrill of the hunt. They spend the majority of their lives alone, pouncing on prey as they happen upon it or chasing it for short distances. Other times they lie in wait, ambushing from the mouth of a burrow.

Now comes the interesting part that got it the #2 spot. They don’t spend their entire life alone. After mating the female wolf spider creates an egg sac that she attaches to her spinnerettes and carries around with her until they hatch, whereupon all the babies pile themselves onto her back essentially turning her into Dorothy from the movie Twister. (Just watch it.) She continues to carry them around this way until their first molt, at which point she’s had enough and lets her brood disperse, off to become their own lone wolves. 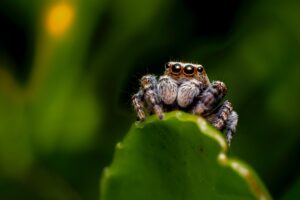 The Japanese have the word “Kawaii”. It basically describes something or someone that is cute, charming, adorable, childlike, and so on, but to an exaggerated degree. Think “Hello Kitty” or Squishmallows. Jumping spiders have this quality in spades. From their compact fuzzy body to their large close set frontal eyes they exude charisma. It’s hard to look at them without anthropomorphizing and coming up with a personality for them. Their aesthetic is so strong that there’s an online community dedicated to keeping them as pets and using them in photography. They’re pretty much the Shiba-inu of the spider community.

Life is not all just a big popularity contest though. With over 600 described genera and more than 6000 species, jumping spiders are the largest family of spiders on earth constituting about 13% of all spiders! They don’t build webs and use the depth perception that those two big eyes up front give them to “jump” and snatch prey.

These are just my favorites. With as much diversity as we have here in Oregon, your list may be much different. Let us know your favorite on the Good Earth Pest Company Facebook page. If you want to go on an even deeper dive into our native spiders check out the Oregon State University extension service website. I particularly liked this list they had about central Oregon spiders. Heck, go to the library it’s better for your eyes, and you only have 2.