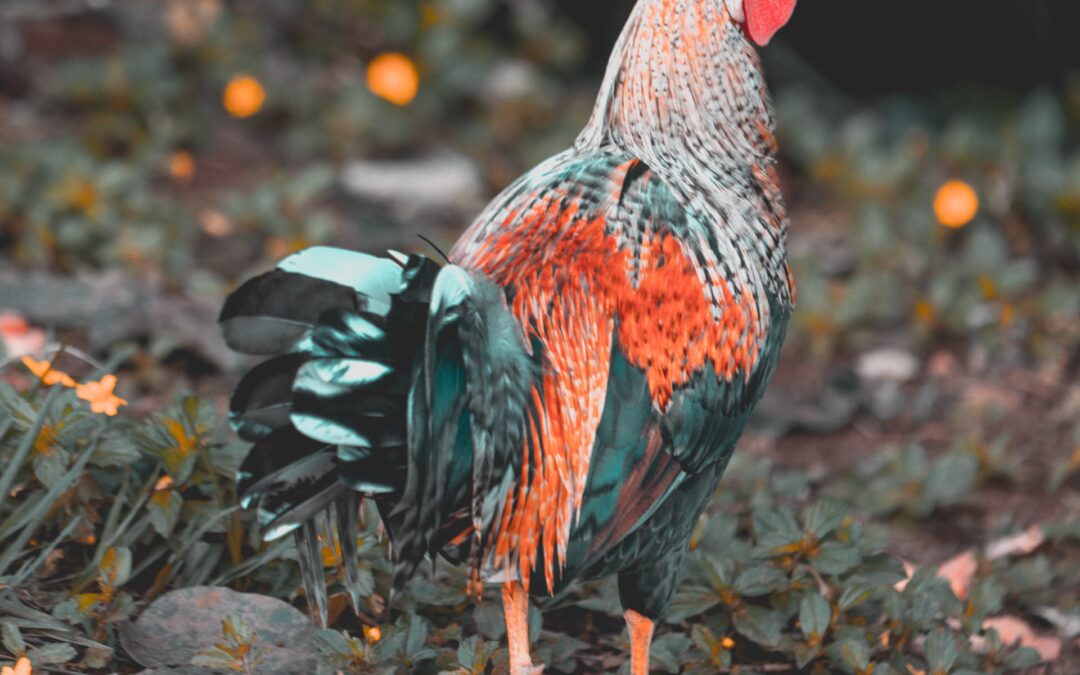 If you follow my blog (and who doesn’t) you may recall my recent research trip to Kauai. My first time being on the island, I expected lush jungle and palms surrounded by beaches and warm blue waters. But what was I greeted by when leaving the airport? Chickens. Everywhere… chickens. Waiting for my rental car… chickens. In the Costco parking lot… chickens. Walking down the sidewalk… chickens. These aren’t your everyday big egg-laying mainland chicken either. These are small, compact, sleek, and built for speed. The males are also flashy with long tailfeathers and a crazy varied color palate ranging from a red and white and green to all black.

So, what’s up with these chickens? There are signs everywhere telling me not to feed the chickens. People working tours and in stores are always saying things like “Two free chickens with the purchase of a pineapple!” or “as a prize for knowing this mountain’s name you can go outside a collect three chickens as your prize”. A lady told me an anecdote that was basically if you put the chicken in a pot of boiling water and add a bunch of rocks to it, in so many hours the rocks will be eatable. Seems like nobody likes the chickens. In another confusing twist, they are also protected under state law. Why!? The chickens are an ecological disaster, a prime example of what can happen when a non-native organism is introduced into an ecosystem that has no predators.

So where did they come from? Well, in days of yore, Polynesians started settling the islands and with them, they brought jungle fowl. Think of them as a pheasant-ish proto-chicken. And for years the jungle fowl made themselves at home reaching an equilibrium with the island’s ecosystem and becoming native. (it’s an island, everything is introduced.) Much later as the population grew and cultures blended and agriculture spread across the islands, chickens were brought to the island and kept in coops for meat and eggs. And it was all loco moco from there on out.

That is until 1982, when hurricane Iwa tore through, followed a decade later by hurricane Iniki. The high winds destroyed coops and scattered the domestic chickens all over the island. In the decades since the two species have interbred so much that there is little left of the original jungle fowl and in its place is a hybrid that unlike its forebears can lay eggs continuously instead of seasonally. Leading to an explosion in population due to no natural predators. What does this mean for the island? One thing is certain, there were a whole lot more geckos before 1982.

This got me thinking about invasive species here at home. Some are more harmful than others and some seem like they’ve been here forever, but they all have one thing in common: they didn’t choose to come here. Through either ignorance or greed, they were brought by people and then released into the wild where conditions were adequate to thrive. Let’s explore some of the biggest “winners” of the invasive species game. 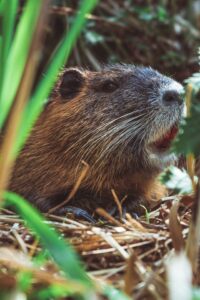 With its buck teeth and long naked tail, the nutria could easily be mistaken for a rat if it wasn’t so monstrously huge. Measuring up to 1.7 ft. and weighing in at 14 lbs. (encyclopedia of life) this giant rodent was transported from its native South America to the west coast of North America by fur farmers in the 1930s. Being semi-aquatic it sports a valvular nose that can close to keep out water and two webbed feet on the back corners. Although mostly active at night they can occasionally be observed swimming or sunning themselves on the banks of waterways, lakes, and wetlands. The problem with nutria is that they are outcompeting our native muskrat. They also make homes in burrows that they dig into the banks at the waterline. This leads to a weakening of the banks and an increase in erosion. 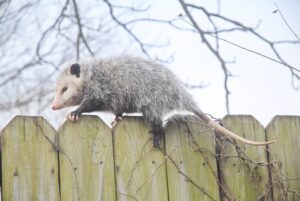 With Its likeness used on T-shirts and other merchandise, often accompanied by the words “Live ugly, eat trash, fake your death, get hit by a car”, The Virginia opossum is also a non-native species found here. It is one of those so ugly it circled back to being cute-type things. Although the opossum is native to the US and is the only marsupial native to North America, it wasn’t introduced to Oregon until 1910-1921 (ODFW). There are many theories on how it was introduced ranging from brought as pets and curiosities to farmed for meat and pelts. The truth is probably some of all of these things.

Personally, I think opossums are interesting. They have a long prehensile tail that can be used to hold things, opposable thumbs on their back feet but not their front, and a brain one-fifth the size of a raccoon brain. Pair that with the fact that inside that pouch they have thirteen nipples. Thirteen, that’s odd! Twelve in a circle with one right in the middle. Despite being so utterly bizarre they are amazing opportunists and are highly adaptable. Unfortunately, that means that they are always getting into trash bins, pet food, and scaring people on their back porches at night, and that makes them a pest. Not to me though, I ain’t mad at them, I got nothin’ but love for them. Do your thing opossum.

I’m not too jazzed about this next one considering I may be on the receiving end of its wrath someday. Vespa Mandarina, aka Asian Giant Hornet, aka murder hornet, aka Northern Giant Hornet, is the world’s largest hornet. With a length of up to two inches and a wingspan of up to three, this thing dwarfs our local bald-face hornet. Believed to have come to North America on a boat carrying freight, it found the climate in the pacific northwest ideal and was first identified in Washington in 2019. They nest in the ground and the hollows of logs and feed primarily on other insects. This becomes a problem when they find honeybee hives and start feeding on the workers. A single hornet can kill 40 honeybees a minute and if there are enough of them the hornets can destroy an entire population in a matter of hours.

Afterward, they occupy the nest, feeding on the pupae of the honeybees and feeding them to their young (Pestworld). Murder Hornets indeed. Due to its threat to agriculture, local wildlife, and people (they are known to kill up to 50 people a year in Japan), there are concerted efforts to prevent the hornet from gaining a foothold on this continent. The biggest problem is finding the nests. Washington Department of Agriculture has gotten clever by setting traps, some using beehives and others using orange juice. Both have the same goal, catching live hornets. They then tie tiny trackers to these hornets and let them go, following them back to the nest(ScienceNews). They arrive in protectives suits to vacuum out the nest and then pump in co2 to make sure that they don’t leave any survivors.  Effective but not very efficient. Hopefully, we can find all the nests and stem this tide, but I have a feeling the Giant Asian Northern Murder Hornet is here to stay.

When it comes to controlling invasive species it’s all about community. Informed locals and professionals being vigilant and reporting to the proper authorities. Whether it’s the Asian Giant Hornet or the Emerald ash boring beetle (that you can read about in my previous blog) there’s a lot of ground to cover and that takes a lot of eyes. There are resources on the Oregon Invasive Species Council website including hotlines, maps, and report histories.

Tell us your stories dealing with invasive species by connecting with us on Facebook and Instagram @goodearthpest.