How to handle Box Elder Bugs and Stink Bugs 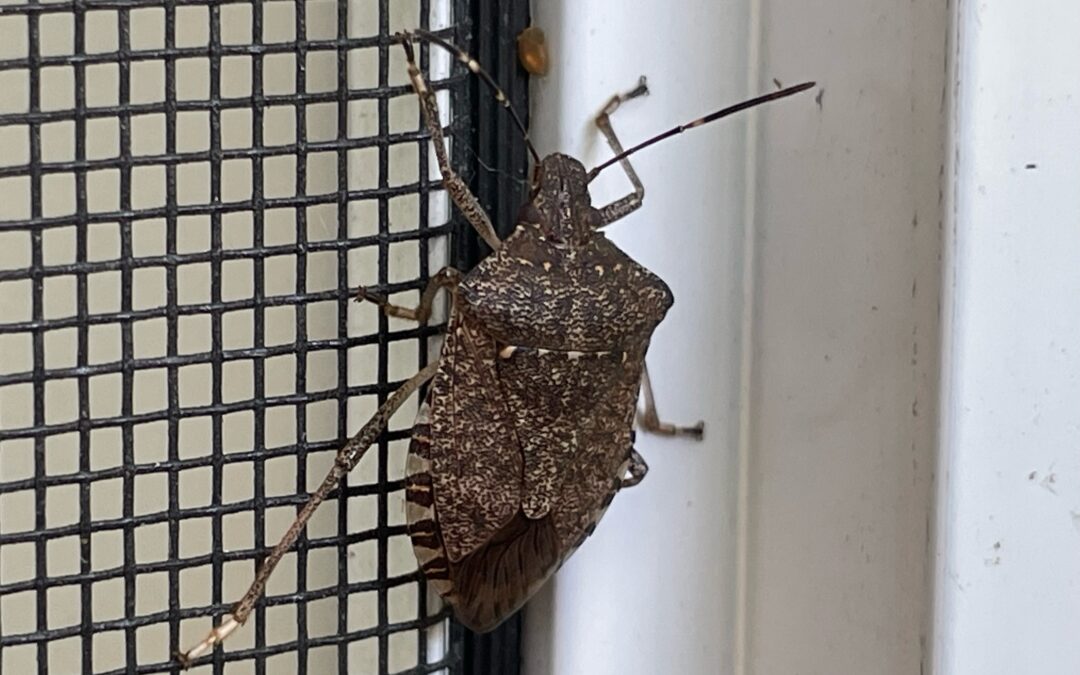 As a pest control technician in the Willamette valley, summertime is our busy season. Phones are ringing off the hook and our clients have all sorts of insect related issues ranging from yellowjackets in their retaining wall to carpenter ants in their bathroom. Then, in come the spiders in late summer, covering everything in webs and egg sacs. Before you know it, one morning you are leaving for work, and you realize its cold! Finally, a respite from the headlong rush that is the summer, but when you get to the office the phones are still ringing. The day gets warmer, the phones ring louder. Then you remember: there’s one final hurdle for us in the pest control industry to jump over before winter.

If you live in Western Oregon, particularly in the hills or rural areas, you’re probably familiar with the pests causing this last hurrah of activity. When evening temperatures start to drop, you may find brown bugs and other black bugs with red lines massing on the sunny sides of your home. These two characters are the Brown Marmorated Stink Bug and the Box Elder Bug.

A little background information is helpful.

The Brown Marmorated stink bug, native to Asia, is an invasive species here in the U.S. It was first confirmed in Allentown, Pennsylvania in 2001 but specimens were collected as early as 1996. (USDA) They are a significant crop pest in the mid-Atlantic region feeding on high value crops such as apricots, Asian pears, and nectarines. They are a dime sized, shield shaped, true bug of the order Hemiptera, which also includes the afore mentioned box elder bug, aphids, bedbugs, and cicadas. They are mottled brown in color and get their name from the chemical odor they emit as a defensive mechanism, making them less palatable to predators. 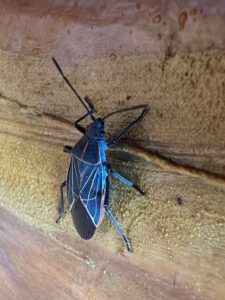 The Box Elder bug is a flattened oval shaped bug about ½ inch long. They are dark brown to black in color with orangish red markings on its back. They have a gradual metamorphosis where the nymph is completely red, and the color darkens as the insect matures and gains wings through several instar phases. They can also emit a foul odor when defensive but are named for the tree on which they prefer to feed and lay their eggs. They are rarely a food crop pest but will on occasion feed on plum and apple trees.

They’re what we pest professionals call “overwintering pests”, meaning when the temperatures start to drop in the fall these critters start looking for a place to hole up for the winter. While naturally they would find shelter out in the environment under tree bark and logs or perhaps in piles of leaves, the heat signature of the sunny side of a house acts as a beacon to them. We have built them a prefabricated, heated, dry, winter chalet that they cannot resist. The insects work their way into the cracks and crevices of the home, getting into the tracks of windows and under doors, entertaining the resident housecat and annoying the heck out of you. They get into the attic spaces and wall voids, going dormant for the winter, occasionally waking and showing up in the living space when you crank the thermostat mid-winter. Then becoming a nuisance again in the spring when they want to leave their winter hiding spaces and start the cycle all over again. 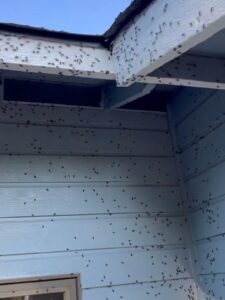 Box Elder Bugs on the exterior of a home 2 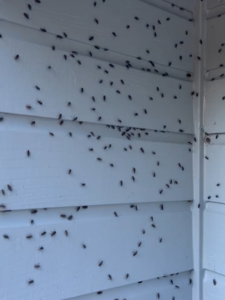 Box Elder Bugs on the exterior of a home 1

They don’t bite. They don’t do any structural damage. Although they can die in attics and wall voids during the winter which can potentially lead to a secondary infestation of dermestid (carpet) beetles, whose larvae eat the dead carcasses. It’s mostly just the ick factor. They’re big, they’re loud flyers, and they don’t conform to the human ideals of personal space and privacy. So, what to do about these party crashers? Your first and best strategy is always going to be following the procedures of integrated pest management or IPM.

Starting with sanitation or cultural control, we can look at changing the environment around our homes to make the area less attractive to the target pes

ainst homes as well as raking up and disposing of leaves rather than leaving them in piles can be a big step in reducing harborage. Keeping stacked firewood and lumber in an area removed from the house also can help.

Next, we come in with our physical barriers or mechanical control. This is altering the home to be resistant to the entrance of our invading pests. Weather stripping aro

und doors and windows, fine screens on eve vents, metal flashing, and caulking closed all the cracks and cervices on the exterior of the home will reduce any opportunity for them to enter the home.

Finally, we rely on the chemical control portion of our defense. The Box Elder and Stink Bugs are hardy and their resistance to pesticides is pretty high. A m

ixture of water and detergent sprayed onto the insects is an effective way to reduce the numbers on the exterior of the home. With no residual effect once the mixture dries, this strategy will only eliminate the individual bugs that are sprayed at that time. Any chemical application for these pests is best left to a professional who will know which products are effective for their treatment and how to apply them properly. This is best accomplished by calling your local pest control company (like us here at Good Earth!) when the insects first start congregating on the exterior of the home in the fall. This is because although the products may have a long residual effect, we want them to be as fresh as possible when the insects are trafficking across it and landing on the home. This will also maximize any repellency that the product may have.

Ultimately all these efforts are just mitigation. You can take some solace in the fact that everything settles down once it gets cold enough. Any bugs found inside at this point are best removed

ia vacuum cleaner.  The steps I listed above are effective at reduction, however, if the numbers are high enough there’s still going to be some that get through your defenses. I guess Goldblum was right…“Life, uh, finds a way” you might say.